We Are Open.
Detail on our current operation during NZ's Covid-19 lockdown is available here. 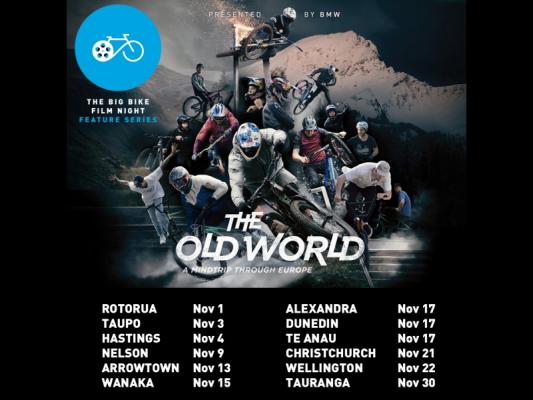 Posted in News By Shockcraft & Biken  27 October 2021 2:44:56 pm NZDT
A new Big Bike Film Night Feature Series starts in 4 days, screening around New Zealand for the month of November 2021. The feature move is The Old World - A Mindtrip Though Europe.  Shockcraft & Biken will be at the Alexandra screening for a chat.

From Brett at The Big Bike Film Night:

From the remote fjords in Norway, the magic Scottish Highlands, the rough alpine mountains, the famous bike park in La Poma or the metropoles like Paris, this film crisscrossed Europe for two years to capture the rich European riding landscape and its biking stars.

Shot in a dedicated way, The Old World portrays the various disciplines biking has to offer while telling the story of imagination and passion. Something every rider, sports fan and dreamer can relate to. In an artistic side story, viewers will accompany a passionate mountain bike fan and analog photographer, portrayed by Bless Amada, on a mindtrip through an imaginary world that opens up new dimensions of biking.

Different to the usual action-led bike films, The Old World not only bridges the gap between mountain bike and BMX riding but also between action sport movies and feature films.

So…listen to the voice inside you; it’s telling you to go. Grab your mates, grab your tickets, GO ON… grab your bike and come along for the ride!!